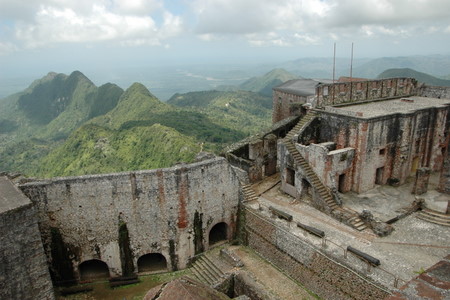 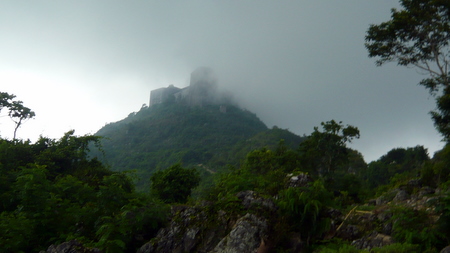 The Citadelle Laferrière is a large mountaintop fortress in northern Haiti, approximately 17 miles /27 km south of the city of Cap-Haïtien and 5 miles /8 km uphill from the town of Milot.
10’000m2.

It is the largest fortress in the Americas and was designated by the United Nations Educational, Scientific and Cultural Organization (UNESCO) as a World Heritage Site in 1982—along with the nearby Sans-Souci Palace. The mountaintop fortress has itself become an icon of Haiti. The Citadel was built by Henri Christophe, a key leader during the Haitian slave rebellion, after Haiti gained independence from France at the beginning of the 19th century. 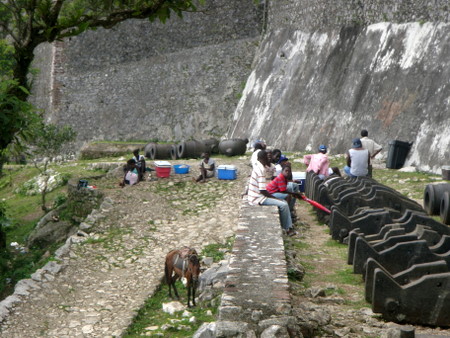 The massive stone structure was built by up to 20,000 workers between 1805 and 1820 as part of a system of fortifications designed to keep the newly-independent nation of Haiti safe from French incursions. The Citadel was built several miles inland, and atop the 3,000 ft (910 m) Bonnet à L’Evèque mountain, to deter attacks and to provide a lookout into the nearby valleys.

The Haitians outfitted the fortress with 365 cannon of varying size. Enormous stockpiles of cannonballs still sit in pyramidal stacks at the base of the fortress walls. 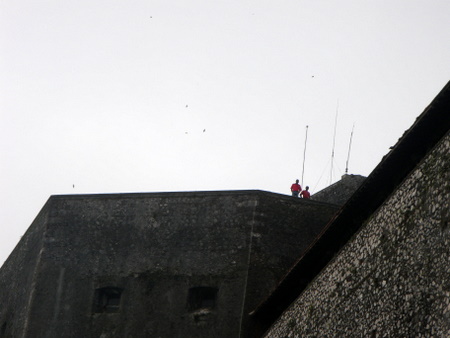 The Citadel was part of a system of fortifications that included Fort Jacques and Fort Alexandre, built on the mountains overlooking Port-au-Prince. Dessalines ordered those forts built in 1805 to protect the new nation against French attacks. Cap-Haïtien and the adjoining Atlantic Ocean are visible from the roof of the fortress. Anecdotally, it is possible to sight the eastern coast of Cuba, some 90 miles (140 km) to the west, on clear days.

Since its construction, the fortress has withstood numerous earthquakes, though a French attack never came.

Initially, one of the two chalk peaks was meant to become the site of the fort. As this construction was supposed to accommodate 2’000 soldiers in times of peace – and 5’000 in a defence case, there was need of a larger surface, so the location was chosen on a lower level: Pic la Ferrière on 970m altitude.
Being so far inland, this location was inaccessible for the enemy – the Citadel was an ultimate retreat place and not a defensive facility.

In his book about the Antilles, Louis Doucet comments that Roi Christophe constructed his Citadel in a similarly absurd way, as if Fort Gibraltar would have been erected on the Mont Blanc peak to defend the Atlantic coast.

Never has a shot been fired against an enemy from these of 1’500m -range cannons. They were lit only twice: once at inauguration – and another time, during a hurricane, when Roi Christophe chose to answer the divine challenge with gunpowder. 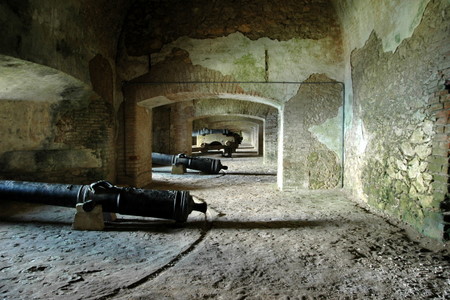 Two architects were engaged with the design: Henry Beese, an Englishman – and Frenchman Henri Barre. Their plans combine two successful types of fortification: Vauban’s- centering the construction around a bastion well adapted to the shape of the slope – and Marquis de Montalbert’s – distributing the fire power between several well-protected batteries. 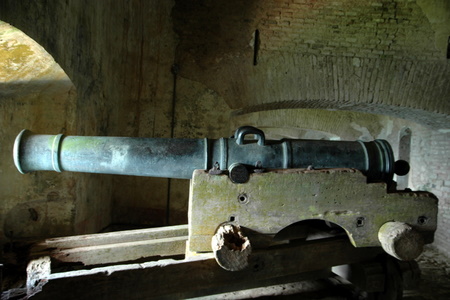 Slavery had shortly before been abolished, yet between 10’000 and 20’000 people were forced to work for this construction. Round 10% of them did not survive, therefore there’s a popular Haitian belief that there is human blood in the Citadel’s mortar. 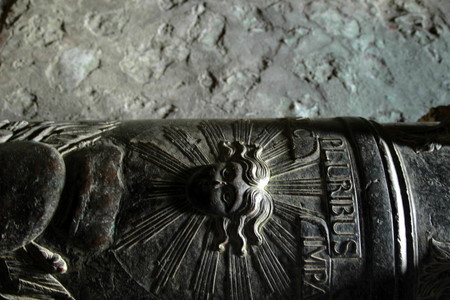 It is said that a group of 50 forced laborers refused to continue pulling up one of the heavy 3ton- cannons when they were half the way up the steep road. Christophe shot down every second of them. The remaining were so terrified, that they managed to carry the weight all the way up. 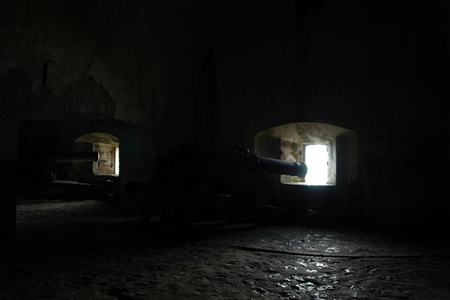 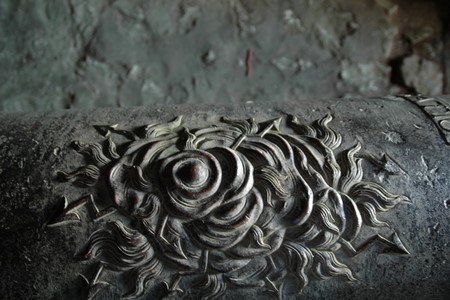 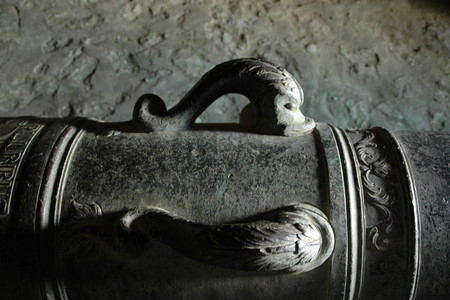 In the 1950es the Haitian government decided to bring one of the cannons to the museum in Cap Haitien. This time the way went down the slope, but because of its weight the cannon could not be moved and was abandoned at the side of the road somewhere in the first one-third, meanwhile being overgrown with vegetation. 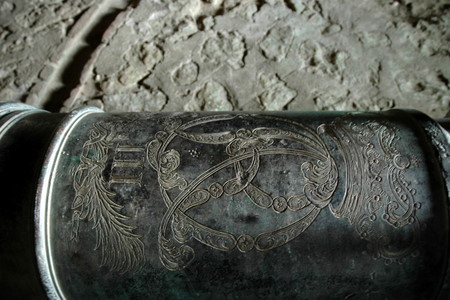 The fort was planned for 142 heavy bronze cannons, 124 heavy ordnance in casemates, 18 cannons mounted on „barbettes“.

Most cannons were obtained as French, English and Spanish booty. Hundreds of cannonballs are still stacked to pyramids all over the site today. 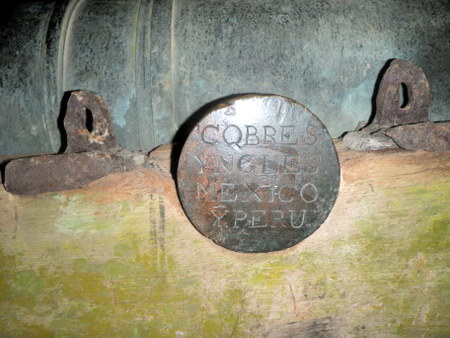 The citadel was constructed in 2 phases: The eastern bastions, the „Poudrière“ (powder-store) and governor’s quarters were first. Later on followed the fortifications on the southern and western part. The distinctive 43m high- cusp was placed at the head of the fortress- and named Batterie Coidavid -after Roi Christophe’s wife’s maiden name. 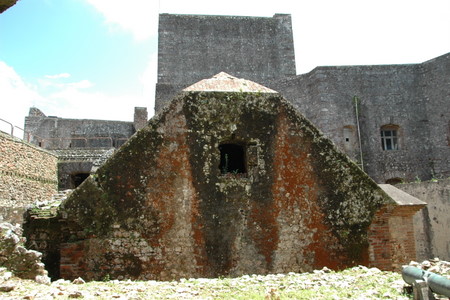 The Poudrière exploded in 1818, killing Prince Noël, the kings son-in-law and Citadel’s commander…. 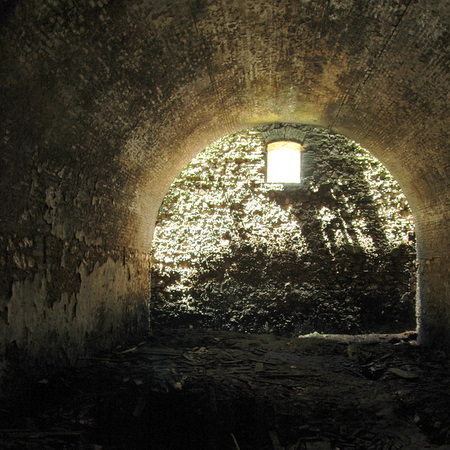 …who was smoking a cigarette nearby. Smell of gunpowder is stil in the air to this dayAfter an earthquake brought great damage to the fortress in 1842, it was abandoned and covered graudually with vegetation – until restoration works took place 1979-1990.

Each side of the fortress’ was adapted to the geographical premises. The bastions are linked by 90m long corridors, 10m wide.

Confronted with the French army once, the king is said to have made his subjects jump down from the butresses in order to prove their loyalty. 16 had to jump, before French General Edouard put an end to this absurd waste. 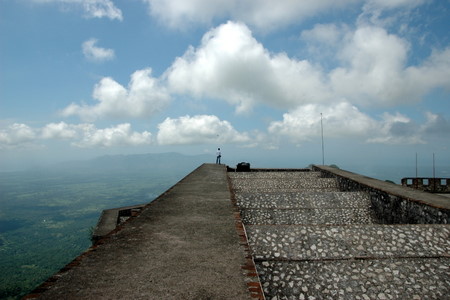 Around the inner court there are the crew’s quarters, the kitchens and the storerooms, each of these 50 feet deep.

As there is no inner spring or water source, huge amounts of rain water were gathered in 8 huge cisterns, to supply the garrison and inhabitants for a whole years’ time.

In the western corner of the yard there is the Poudrière, which exploded in 1818, killing Prince Noël, the king’s son in law and commander of the Citadel. 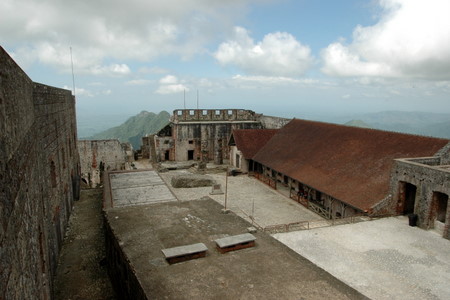 The governor’s quarter was guarded by 3 sentinels. The King, his family and staff would occupy 40 rooms. In one of the rooms there was a pool table in front of an open fireplace.

Back in the times when he was a slave, Christophe had worked in Hôtel de la Couronne in Cap Français (today Cap Haitien). This hotel had a gambling room with pool tables. 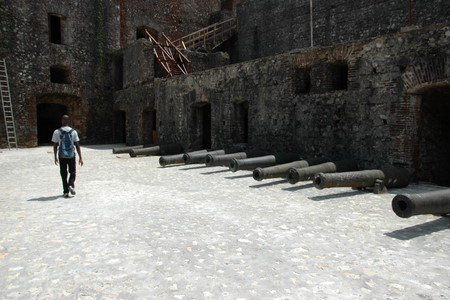 Christophe married the owners’ daughter, Marie-Louis Coidavid and had 2 sons and 2 daughters with her. 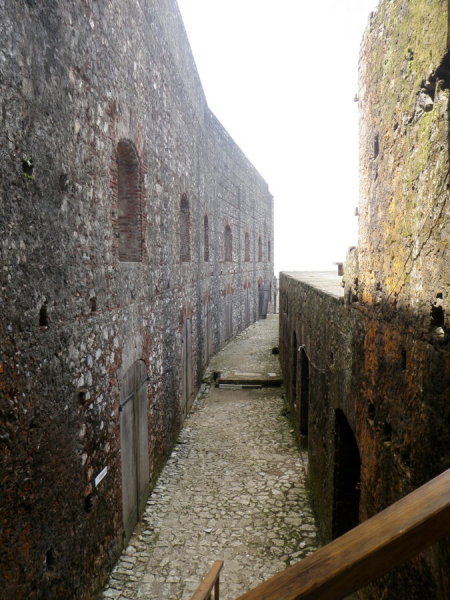 Roi Christophe had been a builder and a very active king. After a stroke he suffered during mass in church St. Anne(?), his physical and mental capacities were impaired. When the palace guards mutinied against him, he shot himself with a silver bullet in the throne room of the Palace Sans-Souci. A secret underground passage is said to lead to this peakMarie-Louise took his body to the Citadel and covered it in quicklime, to prevent the population from tampering with the grave. The jawbone was found though; it is conserved in the Musée du panthéon national (MUPANAH) in Port-au-Prince. 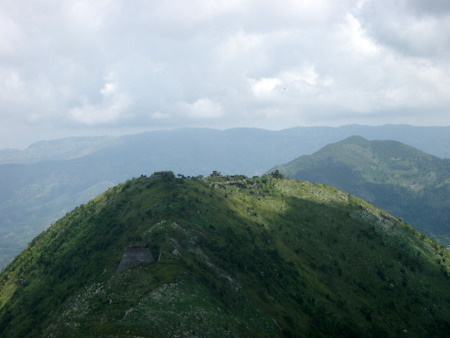 After Christophe’s death, the Queen fled to Port-au-Prince with her daughters and stayed there for one year, then headed for Italy on a British ship. Rumor has it she led a wealthy life thanks to the money deposited in Europe by her husband several years before. She died in Pisa in 1851, after having asked the authorities to grant her return to her natal Haiti. A song to go with it: Safe from Harm by Massive Attack, Blue Lines, 1991 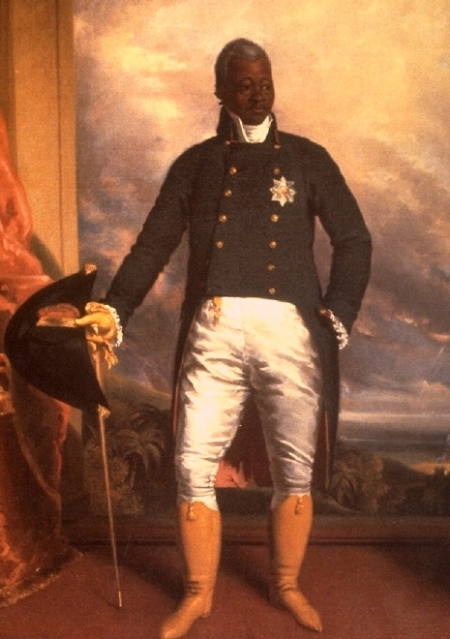 Special thanks to Jacqui Labrom at voyageslumiere.com for organizing this great trip and making it possible to enjoy all these great (in)sights.