Wintertime, 1990. Almost a year had passed since – what we thought was – the Revolution. Our ski camp group was invited to go to Switzerland! Around 20 kids and 3 instructors, we got invited by a lovely lady who had fled Romania in the 80es. We were going to Sion, Valais, and were going to be hosted by the municipality. Our parents planned and organised, discussed and debated, measured and thought it over and we all still didn’t know what to expect, until it was finally on: we took planes and flew through Vienna.
One of the boys got lost on the airport. They found him in the loo, admiring “all this new and shiny stuff, it’s so beautiful…“

We got to Sion in the end, several busses and small incidents later. We were staying at a local shelter with bunk beds and military blankets. (The Swiss military stuff is excellent, I cand assure you.) We got so much chocolate and nice food and everything was clean and smelled of new. Even the old linoleum flooring was sparkling!

The street lights were working. The busses were clean and the drivers would greet us every time. We never really felt like we shouldn’t be there or like we were wrong or bothering…
And the slopes! This enormous amount of impeccable snow, heaped and piled all over the place. The shiny new cable cars and ski lifts. The friendly people who didn’t exactly care about where these little grey monkeys came from, only showing moderate curiosity about our constant amazement at everything that was actually working, the lights, the food, the heating.
The only thing that rarely showed was the sun, a lot less than back home, it only came out twice that week.
But the one thing that definitely had us all shocked was that we could leave our skis on the slope over night! Our brand new rental skis, stuck in the snow and loosely tied together, just like that – and we’d actually find them there next morning.

This Switzerland I encountered there, this everyday life normality and cosiness of a small and very old town – and how extremely strange it felt to us – I’ve never encountered it again since. Sometimes I think I imagined it all. 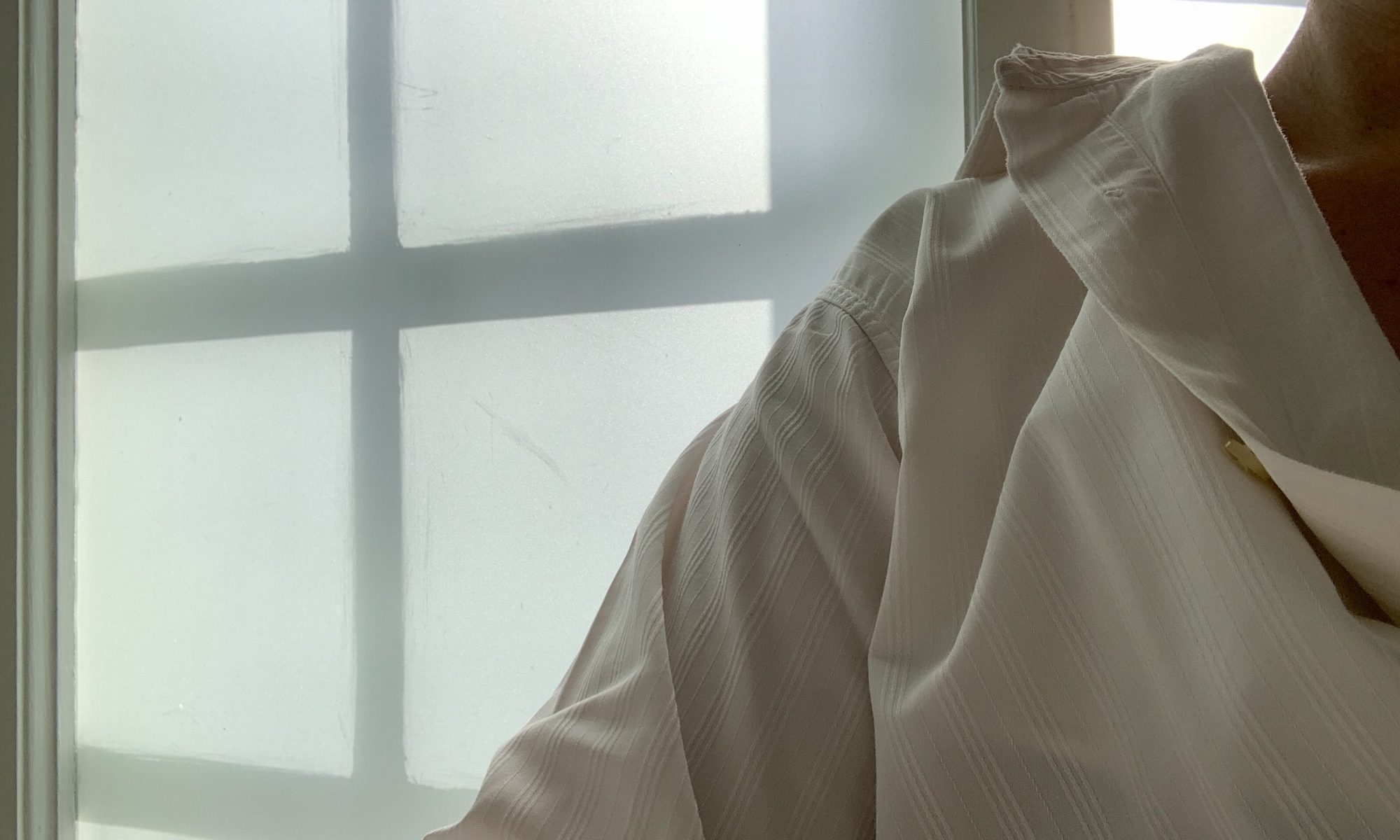 The nineties were so much like the dull grey power suits that they spawned. Stiff and unadventurous they seemed, but my, what was hiding beneath that rough fabric! Linda Evangelista and the super models. These big lipped men, Jagger and Tyler, always a cigarette sticking out of somewhere.

New borders defined the East and the West; still some fear loomed in the wake of the eighties. We were getting bored in high school, spending lots of time playing pool and drinking, discovering love and preparing for faculty. Our parents were working, and money was more than it is today – so was hope.

Sometimes we’d gather at my parents’ house when they were at work, and tried out crazy things. Even cooking! We talked about the wonderful things we’d do with our lives one day. The places we’d see and the things we’d do. We took so many things for granted back then. That we’d still talk to one another. That we’d have the guts. That passion will always be part of it.

One day you teased me about something and I chased you down the stairs – my sandal flew right through the bathroom window – clink! I felt so ashamed… You went to replace the glass sheet before dad would find out. There used to be a “Windows and Mirrors” shop on the boulevard. It’s a Betting store now. I don’t even know where I’d get a window replaced today. But the again, I don’t throw sandals anymore.

the song to go with it

a link to some famous white shirts of the 90es

I miss you so much sometimes. Even though next May it’ll be 25 years since that Wednesday afternoon when I said, “Let’s skip school and go bathe in the lake instead!” But I stayed on the shore and you went out swimming and never came back. I just waited there and I couldn’t believe it. On Saturday we were going to…

That Saturday I stood at your coffin and still wouldn’t believe it. They took you to the grave, instead. Since that day I’ve missed you more than I lived before I met you. I’ll always miss your eyes and your smile and your crazy ideas and your beautiful poems.
I often wonder what life would have been like, had we had more time together. 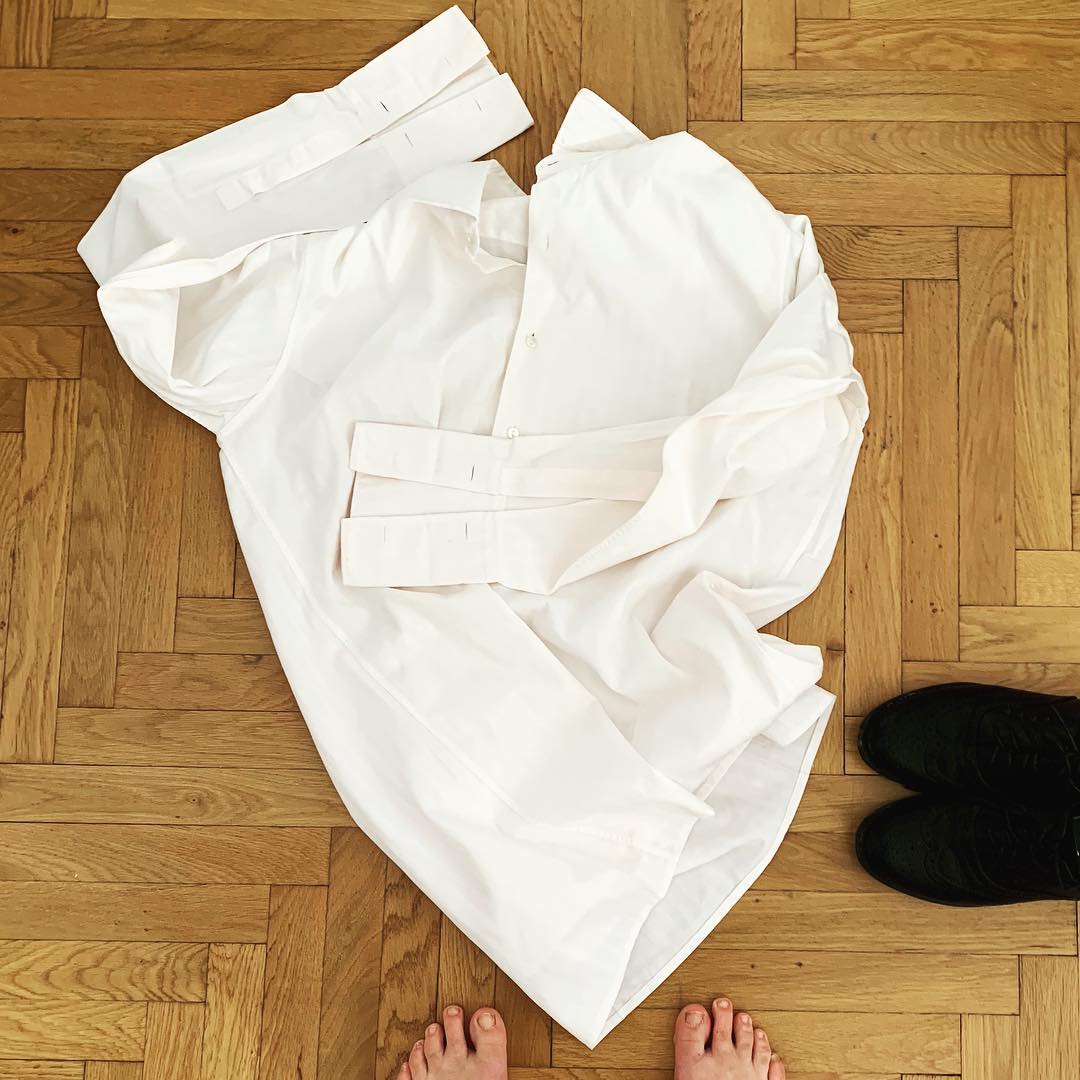 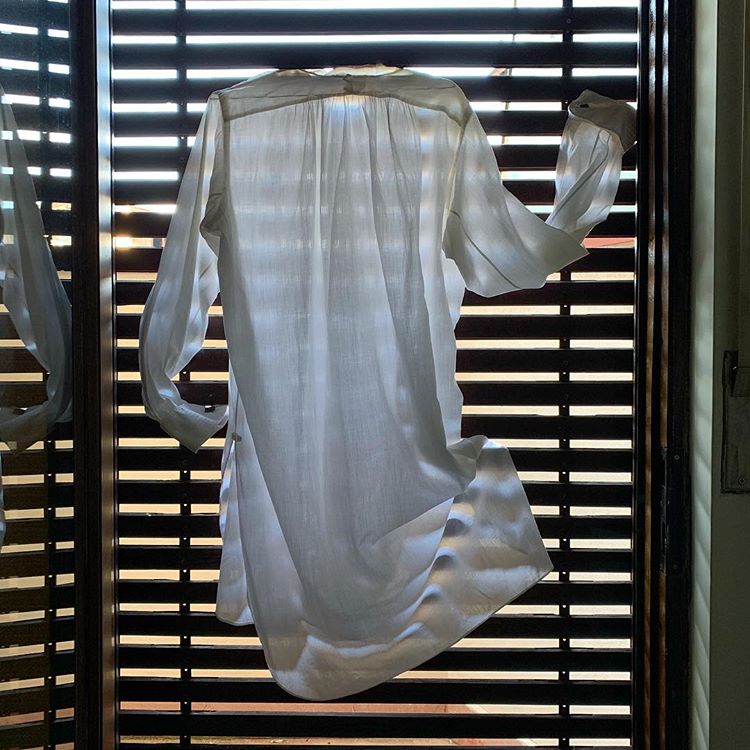 Great-grandma had come from Switzerland to Romania in 1927 as a trained nanny for children with disabilities. Among the things which she attempted to reconstruct in her new country that’d remind her of home was a typically Swiss garden: with flowerbeds and gravel roads, bergenia, violets, tulips, periwinkle, hydrangea, forsythia, rose-beds and an ivy-covered fence.
As people from the North need a constant reminder of their longing for the South, a Mediterranean twist was added: 4 oleanders in wooden crates shed our garden table from our neighbours’ prying eyes, 2 white and 2 pink ones. 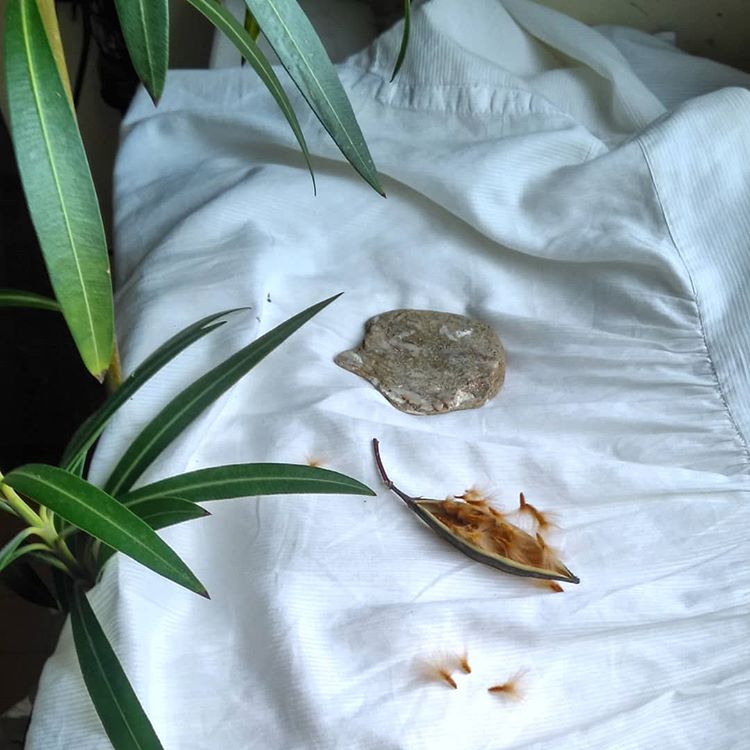 She’d tend to the garden almost every day, so I grew up learning plants by their German or botanical name more than by their Romanian ones. The oleanders grew heavier each year and they needed to be carried down the spiral staircase to the basement every winter. Sometimes they got lice and had to be treated. Sometimes dad didn’t look sad at all when they had to be pruned dramatically, as that would decrease their size and weight proportionately.
They survived everything – except the collapse of the communist party.  When, after years of applying for permits in vain, upon the fall of the regime in 1989, we where finally authorised to switch from heating with wood stoves to central heating, the oleanders snuffed it. 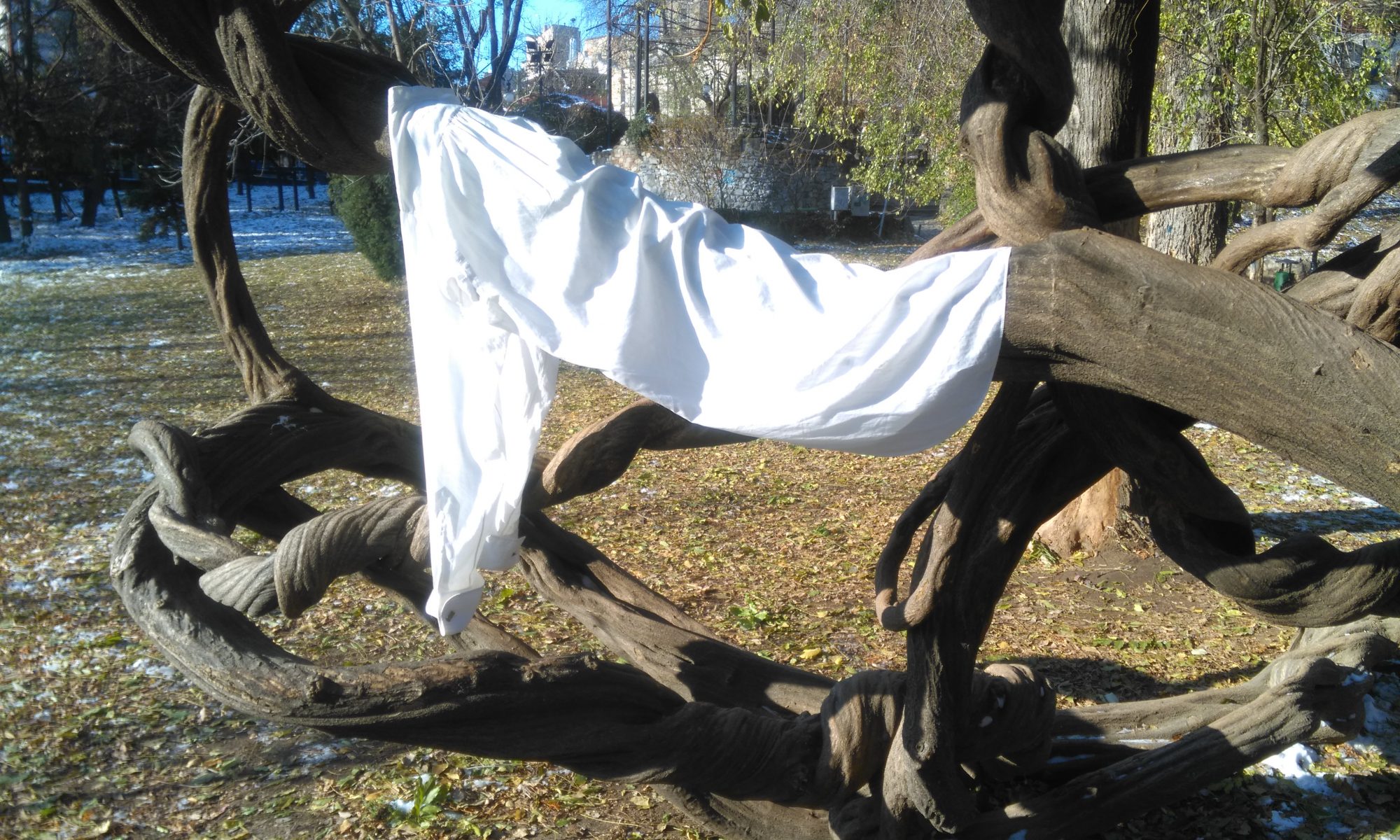 Before 1989 we were taught in school about how the incredibly cruel bourgeois landowners had enslaved and tortured the peasants.
I knew that “in the old times” grandma had owned some land and a horse. It was therefore hard to imagine the most sweet-natured person I knew mistreat any living being, let alone another fellow human.
After the revolution I learned that grandma had been a lawyer in her youth. A city gal through and through, but in love with nature and horseback riding, she had taken up a credit for a few hectares of land close to Bucharest, bought the aforementioned horse and a pair of oxen and had spent most of her free time riding through the fields.
In January 1948 the bar associations were dismantled and lawyers banned from practising law under the new regime.
In March 1949 the collectivisation of agriculture began: everything was confiscated, nationalised; the animals were put into a collective farm. The horse refused any food and dropped dead after a week.
Until this day I have never met anyone more sweet-natured and serene than my grandma. 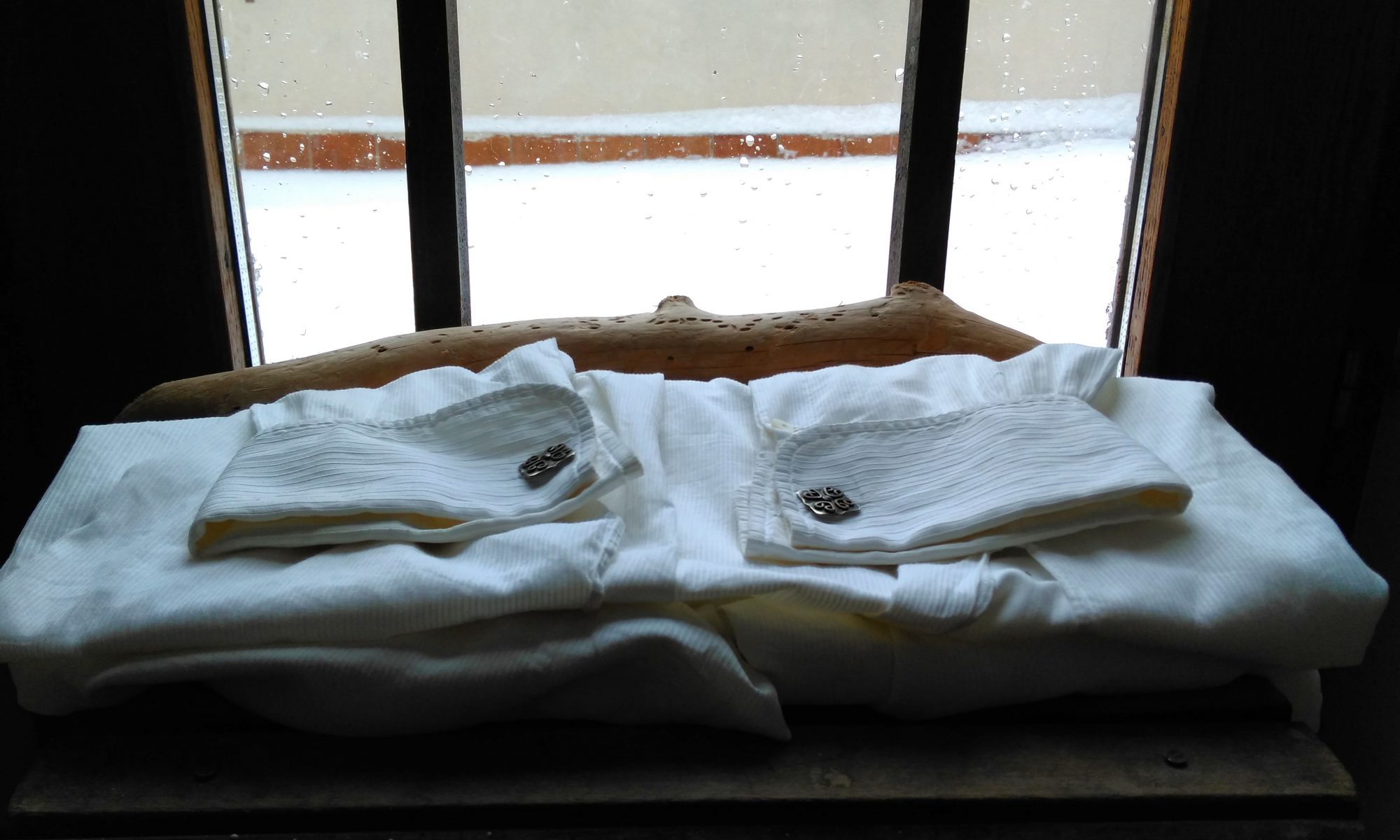 One late autumn day in 1982, two couples spent a night at the Horezu Monastery with their kids. The next morning they were going to gather chestnuts in the woods nearby. But when they woke up, a thick layer of snow had covered everything, blinding white.
So we went for a walk in the woods instead. On the way back, I climbed on a gate to avoid being trampled on by the cows returning to the village in the evening. Clouds of steam from her nostrils. A cow stopped, turned and licked my face.

Every winter on the first day of snow my mind goes back to that morning. The peace of that monastery, the order that seems to come to this world along with the snow. 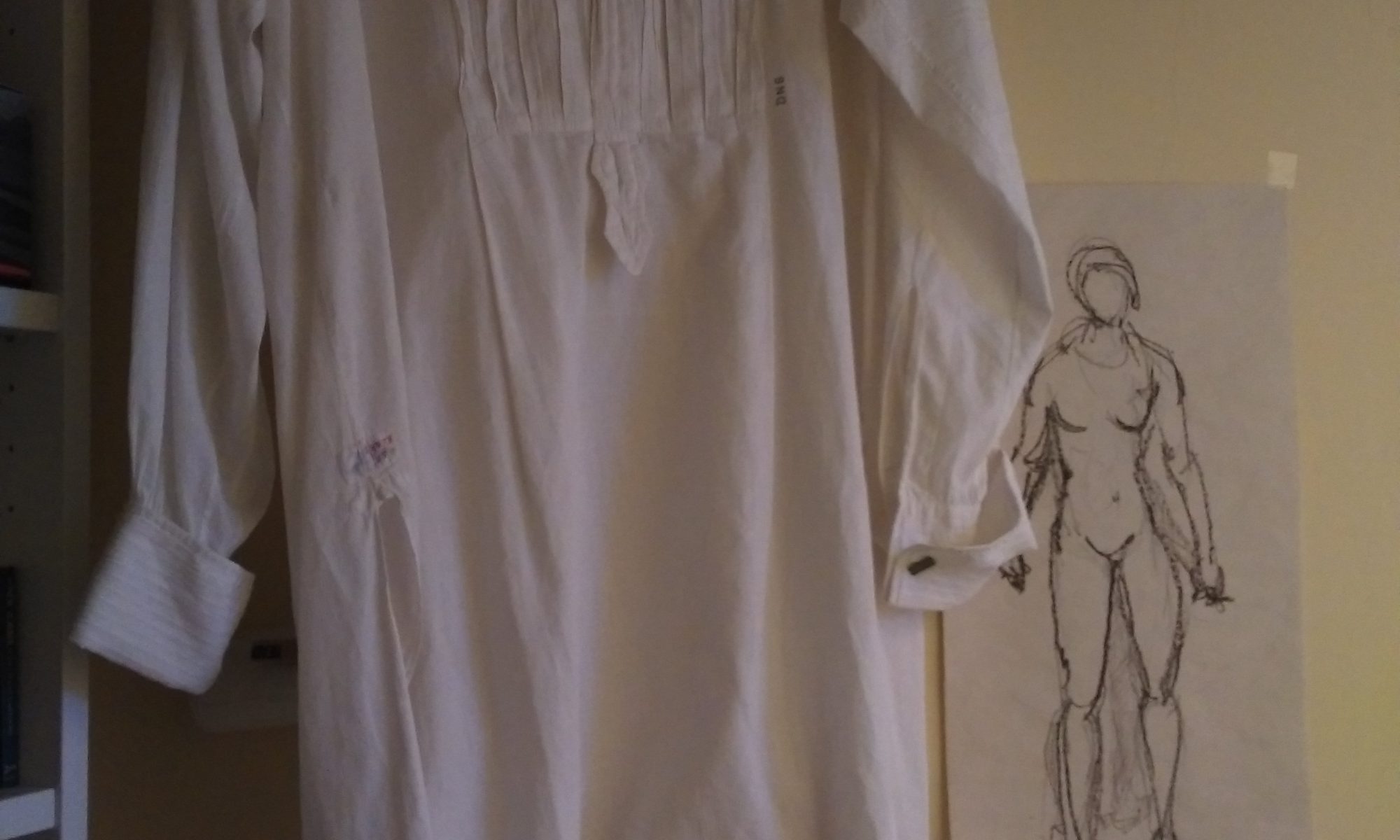 2008. On November 27, I got fired. One day after my 30th birthday. It wasn’t even the first time I got “restructured”, but it was a painful one. We had played “happy family” for some time at the office, now we started playing “last in first out”. It taught me that one dreams and grows alone. And the world doesn’t end with that nice job in a cosy architecture office. 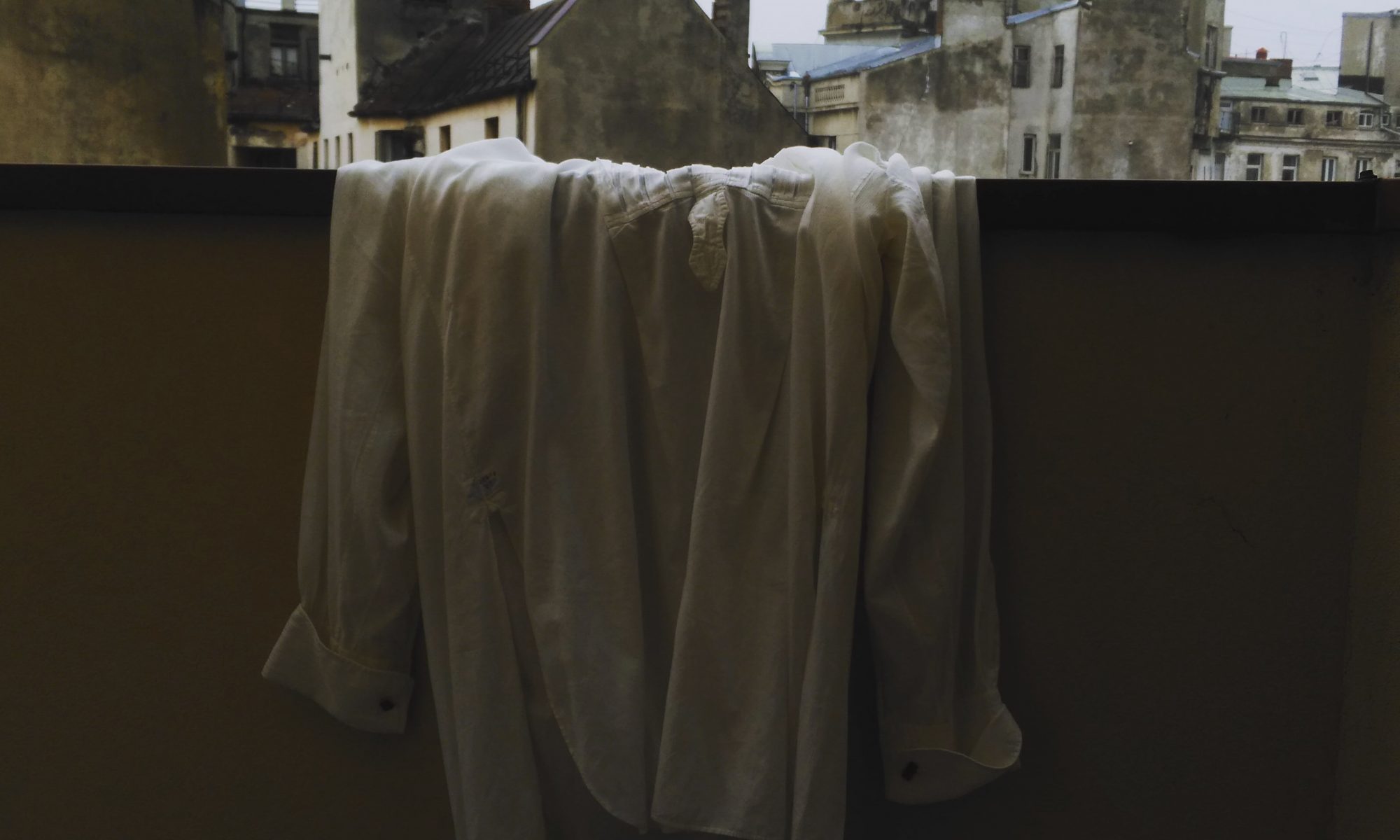 2013, November 24. We met again by chance in some bar. We danced like crazy, almost like that first time when you whirled me around, then suddenly lost your balance and let go. Outside on the sidewalk, your dreamy smile, “where should we go now, somewhere nice.”
“We could go to my place, this time”, I said. “But it’s still under construction, I don’t live there yet.” Let’s.
First time I got to sleep here, on a huge towel in the middle of the room, the silhouette of furniture dressed in some old sheets, leaning against the wall. That foggy morning. Housewarming. #whiteshirtproject #whiteshirt #linen